New Board Officers and Member

Congratulations to our brand new officers for the Foundation Board of Directors! Starting July 1, Ellen York becomes the first woman to be president of the Board in its 21-year history. Nick Richardson takes over as the new vice president and Steve Shutz becomes the new treasurer. 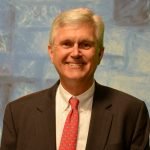 Nick became a member of the Foundation Board in September 2017. He is a vice president of commercial banking for M&T Bank. He has more than 30 years of experience in the banking industry, and has been with M&T since 2011, when his then-employer Wilmington Trust was acquired by M&T. A graduate of the University of Richmond, he lives in Towson with his wife Anita. They have two grown sons. His hobbies include reading, golfing, sailing, hiking and gardening.

Steve joined the Board in June 2016. He is a portfolio manager at Brown Advisory, Inc. Steve, who has a B.S. in Finance from Frostburg State University, is also on the Board of KIPP Baltimore, is a member and former president of the Municipal Bond Club of Baltimore and is a member of the Baltimore CFA Society. In his spare time, Steve coaches his daughter’s under-11 lacrosse team and is involved with the local PTA. He and his wife live in Catonsville with their three daughters.

The Foundation Board also welcomes its newest member, Regina Z. Sanderoff. Regina joined the board of directors in May of 2019. She currently works for Baltimore Gas and Electric (BGE) as a New Business Manager and has a background in finance and accounting. Prior to joining BGE, Regina worked for Global Payments, an International Credit Card Processing Company. Regina has a Bachelor of Science in Accounting from Towson University and a Master of Business Administration from University of Maryland, University College. She currently lives in Owings Mills with her husband Mike and their two daughters, Ayla and Maya. In her free time, Regina enjoys reading, yoga, traveling and spending quality time with family and friends.