Your support makes a difference.

Thank you for helping us write success stories! Here are just a few examples of what we were able to accomplish with your support: 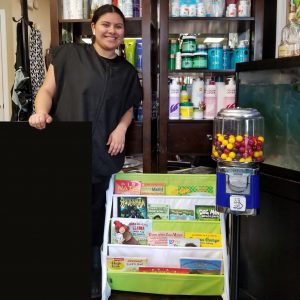 A Cut Above Book Club is a Foundation-funded program created by Woodlawn Branch librarians that established a bilingual book collection at Elsa' International Salon. Elsa's has a primarily Spanish-speaking clientele. The owner and several stylists signed up for her first library card and immediately took advantage of services like My Librarian to use library databases in order to improve English and interlibrary loan to order Spanish-language materials. The bookshelf and collection purchased using funds provided by the Foundation has proven to be extremely popular, with the community even adding to the collection. In this photo, Stefany, Elsa’s daughter, poses with their new bookshelf and bilingual collection. 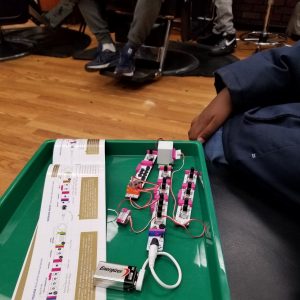 In 2018, the Foundation funded A Cut Above book club, a pilot program where Woodlawn Branch librarians visited two barbershops in the Woodlawn area. Reading areas were created in each shop with a variety of materials of relevance to the clientele. Librarians held story times and took Little Bits Circuitry kits to introduce maker and technology programs offered at the library.

After seeing the librarian read to young children, talk to older children about what they like to read and signing families up for Summer Reading, the owner of Pikasso Kutz was inspired. He started encouraging the children and teens in his shop to read a book at home and bring in a book report on their next visit to receive a free haircut. Many reports have been turned in at every reading level, including reports on books that were provided by the library! 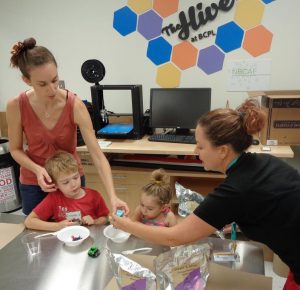 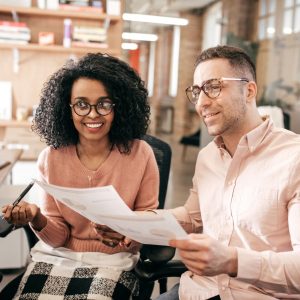 In 2019, Randallstown Branch hosted a Free Tax Preparation site, made possible by the Foundation, Wells Fargo, PNC Bank and our partners at the CASH Campaign of Maryland. More than 1,000 customers earning $55,000 or less received help with their income tax preparations, resulting in more than $1.5 million dollars in returns...and the program is back this year thanks once again to PNC Bank! 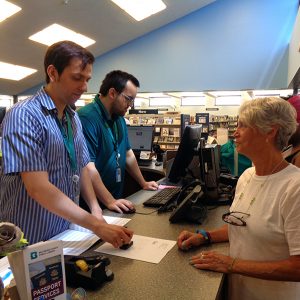 Staff at Essex Branch noticed a need in their community and acted. Using a grant from the Foundation, they created a notary public pilot program. The service was a big hit, with customers coming from all over the county. Users especially appreciate the availability of the service during evenings and weekends — especially Sundays! Over the summer a couple came in with their baby. I had to notarize their baby's signature. But a baby doesn't have a signature, you say? Oh, but they do! The staff used the baby's fingerprints as the signature...and baby stayed sound asleep for the whole process! 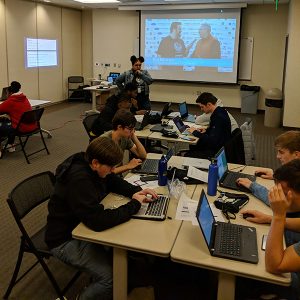 This past year, the Foundation awarded a grant to our Youth & Family Engagement Department for the "Capture the Flag" Ethical Hacking Workshops at the Owings Mills Branch with MAGIC (Mid-Atlantic Gigabit Innovation Collaboratory) that ended with an international competition with 308 participants in 20 locations worldwide. The Baltimore County Public Library team came in third! Congratulations to our hackers! 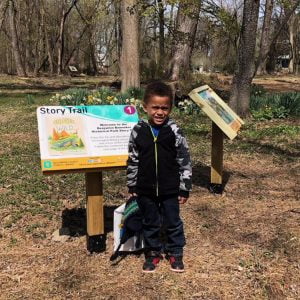 The staff of the Catonsville and Reisterstown branches used Foundation grants to create Story Trails at two Baltimore County parks, Benjamin Banneker Historical Park and Oregon Ridge Park. Story Trails are a series of picture book pages posted along a walking path. The trails promote literacy, exercise and family fun for residents and visitors. The stories change regularly, and the Banneker Park trail was even upgraded to include VR recently! 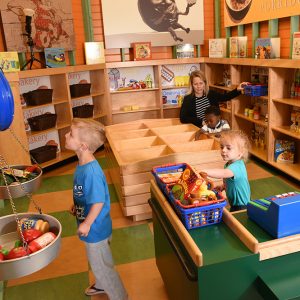 Storyville at Rosedale and Woodlawn Branches

If you've visited either of our Storyville locations, you know exactly just how magical these early childhood learning villages are. Thousands of children have "graduated" over the years. Funded in whole (Rosedale) or in part (Woodlawn) and maintained by the Foundation, both locations remain 100% free for our customers year-round. The little ones — children 5 and under — will have loads of fun and never know it's educational! (We won't tell if you don't.) It's never too early to begin lifelong learning! 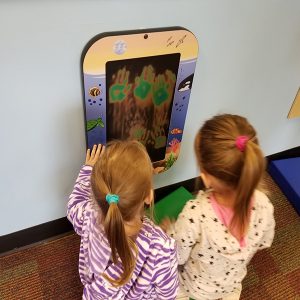 Perry Hall Branch staff created a Sensory Exploration Zone in the Children's Fiction section with help from the Foundation. The Zone provides a safe space for children and adults with Sensory Processing Disorder, allowing them to relax, learn and socialize. Families with children of differing abilities and local special needs groups have found the Zone valuable and report feeling more welcome in the library. One customer even called it "a little oasis." 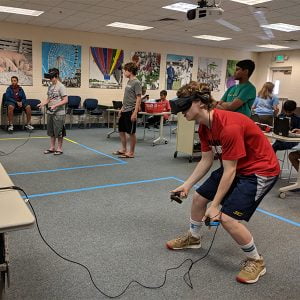 Teens at the Cockeysville Branch got to participate in a five-day coding camp using funds provided by the Foundation. Middle-school-aged campers coded scenes and animations using technology from CoSpaces then got to view their own creations with virtual reality goggles. They also learned real-world applications of virtual reality, including training for NFL teams. 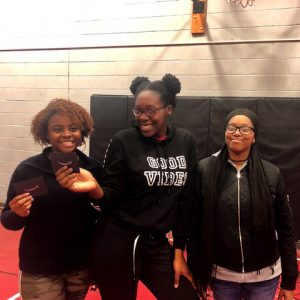 The Influence of Hip Hop at Randallstown Branch

The Foundation sponsored a forum at Randallstown Branch called The Influence of Hip Hop: Remixing the Narrative, a two-part event that included a well-attended panel discussion and a teen workshop with musical artist KompleX. The teens were so engaged that they stayed around to continue discussing social justice issues with the presenter for over an hour after the program ended, which may develop into an ongoing series of teen workshops. 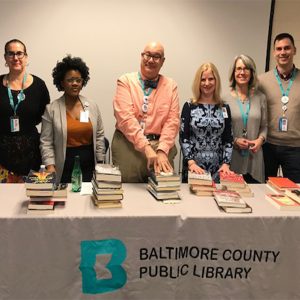 Book lovers got a special treat at the first Book Lovers Bash, an event sponsored by the Foundation and created by the Adult & Community Engagement and Collection Develop departments of the Baltimore County Public Library. Held at Cockeysville Branch, more than 80 people enjoyed a moderated panel discussion, a librarian-led "Shout and Share" book advisory and Q&A with bestselling author Elizabeth Berg. The event was so successful, it is now an annual event! 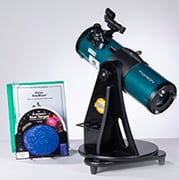 The Stargazer Program at Catonsville Branch

Foundation for Baltimore County Public Library purchased four telescopes that customers can check out, take home and use to look at the sky with a new perspective. The branch also uses the telescopes for programs and has partnered with organizations such as the Space Telescope Institute and the Towson University Planetarium. When asked why the branch staff applied for a Foundation grant to fund the purchase of telescopes, Nicole Wilson, a librarian at Catonsville Branch, said, “We wanted to inspire our customers to learn simply for the sake of learning. Learning is a habit: it often starts at a young age and, if nurtured over time, it can enrich a person’s life with each passing year. We could think of nothing that would inspire learning more than looking up at other worlds.” She added, “One mother told us that when she took one of our telescopes home, she was able to show her children the rings and moons of Saturn — and that it was ‘amazing!’ Because of the Foundation’s support, we have found new ways to amaze, astound, educate and inspire.” 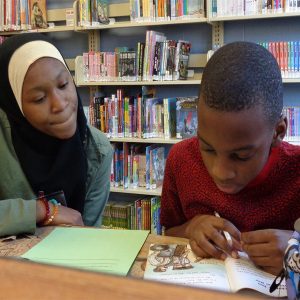 With the Foundation’s support, Reading Buddies pairs teen volunteers to read with younger children grades 1 through 3. Christina Miller, a librarian at the Parkville-Carney Branch, shared one mother’s testimonial about the effect the program had on her daughter, who attended the program because she struggled with reading. Recently, her daughter's teacher told the mother, "I don't know what you have been doing differently, but keep it up! Your daughter's ability and confidence in reading has improved drastically over the last couple of months!" The mother said, "Who would have thought that 45 minutes a week with a Reading Buddy would have such a great impact!" 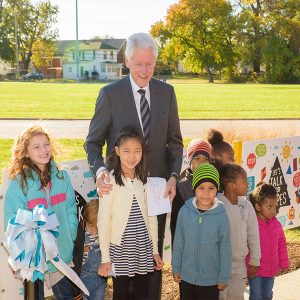 These are just a few examples of the impact your contributions made in Baltimore County. As always — we can only do these things with your help. Be involved — please give to Foundation for Baltimore County Public Library today!

Our Storyville location at the Rosedale Branch hosts monthly Learning Parties, where parents can explore different ways to improve their young child’s learning skills through play. One family attended every single party for three years before the child aged out of the sessions. Jess, the Rosedale Storyville coordinator, saw the family while running errands and asked how the child was doing in kindergarten. The mother said that the boy was excelling and was clearly advanced compared to the rest of his class. She said that the Learning Parties informed many of the decisions she made as a parent, and helped to guide her son’s development. She was grateful to have had that experience with her child at Baltimore County Public Library.

At one Makerspace Monday event at the Rosedale Branch, the participants were mostly girls. The activity involved using Silly Putty and other “gooey” materials. One girl said she didn’t want to participate because she “didn’t like gooey stuff.” After watching the others dig in and have fun, she gave stirring the Silly Putty by hand a try. It was like a lightbulb went off in her head, that there was no reason she shouldn’t like “gross” things, and she started creating with the materials at hand. This is why makerspace is important — to introduce children to things they might not have access to or otherwise engage with.

A school-aged brother and sister approached Randallstown Branch librarian Lori and asked for a superhero book. The boy started to describe it and, as they were walking to the children’s section, the sister started asking about other titles too. Although Lori didn’t recognize the kids, they were both adamant that she'd told them about the books. After a little more chatting, Lori realized they were part of an elementary school Summer Reading Challenge session that she'd attended on behalf of Baltimore County Public Library. Lori read several books and, three months later, the kids came to the library for them!

The Big Give Free Concert

Join Foundation for Baltimore County Public Library on Wednesday, May 18 as we celebrate The Big Give with a free…

Be a Part of Something BIG

This May, Foundation for Baltimore County Public Library needs you to be a part of something BIG. One BIG day…